Christopher Patsos was born in Boston, Massachusetts and lived in Canton, Massachusetts with his parents and two older brothers until he went off to college. He graduated Cum Laude from Brandeis University in Waltham, Massachusetts in 1979.  He then graduated from New York University School of Law in 1982.  He began practicing law in 1983, representing people injured by the negligence of others. He worked at three of the most prestigious plaintiff personal injury law firms in the country for the first 16 years of his career (Kreindler & Kreindler, Levy, Phillips & Konigsberg, and The Jacob D. Fuchsberg Law Firm), and then opened his own law firm on February 1, 1999.

Chris is a sole practitioner.  Clients benefit from his decades of legal experience, yet are treated as if you have the largest case in his office.  You get the attention that only a sole practitioner can offer, plus the results that someone with nearly four decades of experience handling serious accident cases can provide.  He likes to say “we treat our clients like family, only with better results!”. 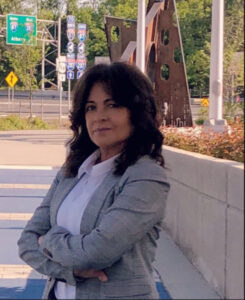 And to help him achieve the great results he has obtained for his clients over the years, he has been assisted for many of those years by Ms. Carmen Diaz.  Carmen was born in Brooklyn, lived in the Bronx, and has been a resident of Rockland County for over 15 years.  She has worked in plaintiff personal injury law firms as a secretary and executive assistant for over 30 years, including many of those years working for former judges. She is fluent in Spanish, is a Notary Public, and has a Private Investigators license.

Chris has maintained an office in Manhattan for his entire legal career, and has represented clients mainly throughout New York City and Long Island.  In September, 2020, he opened another office in Nyack, New York and has expanded the geographic scope of his practice to include Westchester, Rockland, Orange, and Dutchess Counties.

In addition to his legal practice, Chris has become involved in both his Brooklyn community where he lives with his wife in Bay Ridge, as well as his new work community in Rockland County.  In Brooklyn, he for many years was a sponsor of local events, including the Summer Concert series, the Easter Egg Hunt, the Halloween Walk, and Third Avenue Festival.  He also served on his church’s Parish Council for nearly a decade.  He was recently appointed as a Board Member of the Edward Hopper House Museum & Study Center in Nyack, New York.  He is also a current sponsor of The Rockland Bicycling Club, The Nyack Valley Cottage Congers Little League, The Edward Hopper House Museum, and The Friends of River Hook (River Hook is a 12 acre preserve and natural sanctuary located in Upper Nyack, New York), and a contributor to Soup Angels (an all-volunteer non-denominational group of service-minded individuals who provide meals to those in need, no questions asked), and The Nyack Center (the Center serves the Nyacks and the larger community of Rockland County by supporting children, youth and families through educational and recreational programs).